here's a little area dedicated to Tom Pickett ~ the Astronomer, Victim and all round Mr Squeaky Clean nice guy. 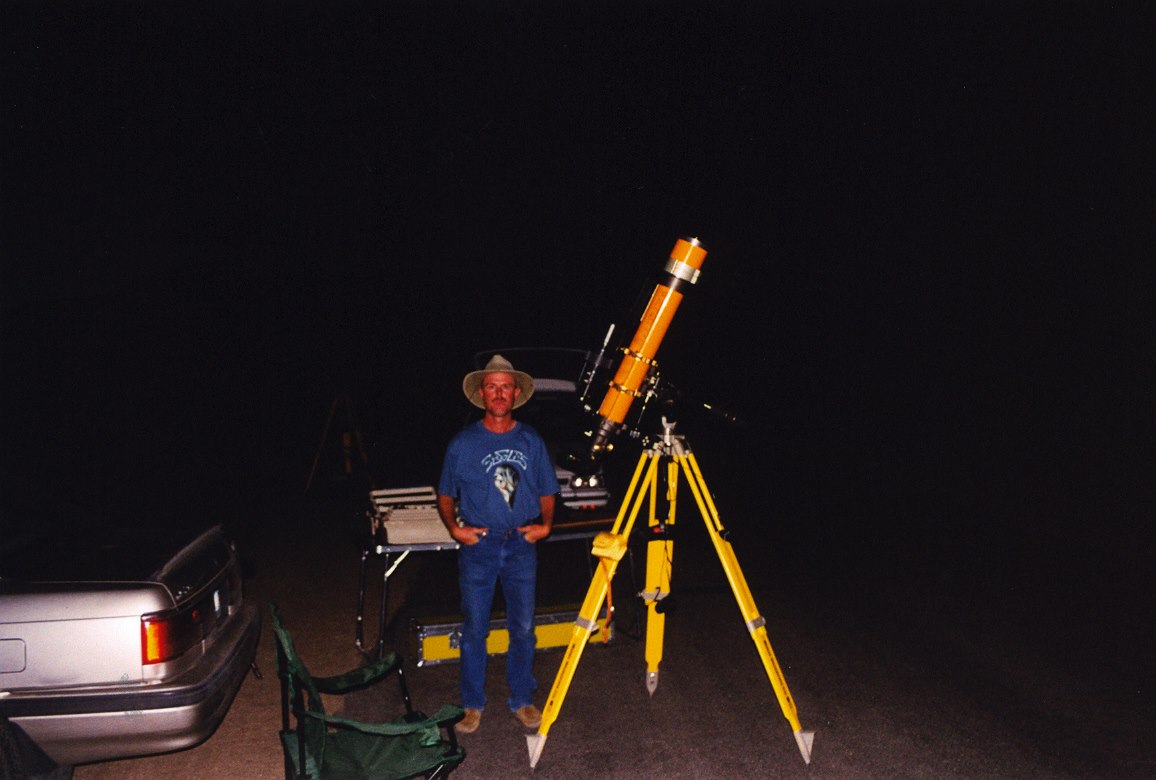 and the man who's telescope equipment was stolen from his front lawn while he was tending to his pregnent pussy.

He had to wait reporting it stolen to the Astro community the "Police" told him to keep quiet for 6 month or 9 months before shouting out on facebook and telling the community how some druggies pulled up in a wagon and threw the gear onto the back of a truck and drove off.
Consequently after best part of a year the sorry tale was duly splattered over the Facebook feeds including the Astro ones, highlighting our "victim" Tom's sorry demise ~
now here comes the "many people have asked if they can donate money to help me replace my stolen gear, here's my paypal link ~ awww poor Tom ~
hang on here's a new Mount donated from my companies stores ~
hang on here's a new Telescope and bits from my companies stores ~
now at this point me and a few others are thinking this is handy, in actual fact smells a bit "fishy" ~ nice though your stolen gear gets replaced for better than the used you had in the first place and you get a wodge of dosh to add a few little extras ~ a new camera filters and filter wheel and etc. oh and you still have the original gear you were well known and respected for creating Astronomy images as a back up ~ fortunately that was not outside on that fateful night ~ ahh lifes looking up.

So why do I mention all this crap like I give a fig ~ well it;s like this.. Mr Tom was recently (March 2020) playing the I'm the Victim on Face book bleating he'd been removed from a large Astro Group becaues he'd blocked one of the Admins over some political disagreement, which reminded me of me and other FB group owner - admins blocking him in the past, and I couldn't resist saying that me and other groups had removed you from our FB groups after he'd touted for monies for "my telescopes been stolen" ~ no mention of calling him a liar, a con artist etc. etc. anyway he went off on a rant blah blah blah none of which I could see because as such Tom the kind loving all humanity Pickett blocked me so I can't respond or reply to his mundane rampage, hence this little online article. All he had to do was be polite and say something along the lines of "actually I can see where your coming from but this and this happened, and as a result I'm doing this" etc. etc. but no... just vindictive, puritanical swearing and yet again "look at me" Tom Pickett the Victim ~ more like a conman.

Now do I think Tom Picketts a deceitful liar and a toe rag con artist who manipulated peoples good will to his own advantage and improperly used that and the funds ? ~ yes I do and think there are some questionable actions ~ one minute I'm a poor man living in a one room apartment surviving on state dusability payments then a few months down the line buying land with a mobile home installed "oh" and I think I'll buy the adjacent plot so that no one else will and spoil the dark sky with light pollution.

So who's the victim ~ I suppose if/when the original gear was stolen initially Tom Pickett but 6 or 9 months ~ or is it 2years (gawd knows) later ~ if I had donated money I would now be considering myself victim and be contacting paypal to ask for a refund, (beleive it or not I nearly did !!)i.

Snce I posted my comment people have contacted me saying congratualations for being brave enough to question the shanigans, transparency and honesty of Tom Pickett over this, a figure of $22000 dollars raised was made, another person was going to contact the police to get incident claim information... don't they have INSURANCE in Texas.

Recent update it was PM messaged to me and it appears cuddly Tom Pickett's pension funding has come through affording him the opportunity to purchase land and new mobile home ~ makes it even worse ~ he knew that money was coming through and still advertised and took money from £my friends" oh dear dear dear.

Below: some of the screen shots supportive people forwarded to me after I'd been blocked showing the measure of American understanding, reasoning and diplomacy after I'd been "Picketted" oh joy

poor Toms so called mate chirps in with a total load of twaddle.

and clear skies to you too...

"The statements made constitute my opinion and accurate train of events is not set out to be vindictive or defamatory, it is presented as it occured and are the facts as happened. and form part of my right to free speech and opinion.. "

"I wanted to congratulate you on being blocked by Tom Pickett. Clear skies."

"My Facebook smells far better without him. I hope you enjoy your new Pickett-free internet experience"

"Absolutely right, I must have spoken to 6 people that all think the same"

"I just think the honestly is refreshing, so refreshing he won’t know what to do with it"

"Good on ya pal someone had to say something!
Alway been weary I am not sure he even has that kit anymore, everything he posts is reprocessing from years ago."

"He's a disgrace if all this is true!"